About 2,000 spectators experienced the main competition at the premiere of the pole vault meeting on the Neuer Messplatz. The capricious weather (strong headwind and an approaching thunderstorm) could not stop the good mood of the spectators and the good performances of the vaulters.

Despite the wind and weather, the mood drove the participants to quite remarkable performances. 5.71 m was the convincing victory height of a well-known pole vaulter in Landau: Konstandinos Filippidis from Greece, who won again after 2015. His performance was all the more remarkable as he had broken his foot only in March.

However, the other pole vaulters were also acclaimed by the audience. The participants included Daniel Clemens, whose participation was sponsored by ProNES. The picture shows Daniel Clemens from LAZ Zweibrücken and Jochen Weber, Managing Director of ProNES. Clemens occupied a midfield position of 5.41 m.

You can already look forward to the next pole vault meeting. In better weather the meeting record will certainly be raised further.

Via the video link you can watch the victory vault (once again): 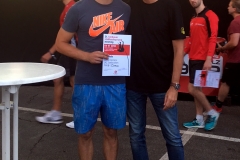